This very attractive and rare Dutch Biscuit Barrel by Petrus Regout is in the shape of a coopered barrel and is cream/pale yellow in colour with black rims marking the shape of the barrel around the top and bottom. The lid is decorated with black circles on the knob as well as inner and outer edges.

Petrus Regout established his pottery and glass factory in Maastricht in 1834 and grew to be one of the most important Dutch tableware producers from the latter half of the 19th century until World War 11.  He hired British specialists to compete with popular British creamware and adapted higher standards.  His sons were incorporated to management of the company and it then changed to Petrus Regout & Co.  In 1879 the image of the Sphinx was used as the company logo and since 1899 the company changed its name to De Sphinx.  It went onto change its name several time and in 1994 was take over by Gustavsberg, a Swedish Firm. 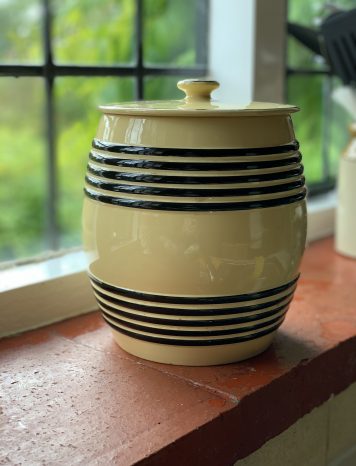