Edwin Ellis was an English artist born in Nottingham England. He started working life as a lace draughtsman. As an artist he was known for his dramatic pictures of the British coastline particularly around Yorkshire, Wales and Cornwall. He painted mostly in oils in a broad impressionist style. He also painted in watercolour.  He exhibited extensively at the Royal Society of British Artists (elected member in 1875), the Royal Academy and many other galleries in London and other UK cities. A major retrospective exhibition of his work was held at the Nottingham Museum and Art Gallery in 1893. He declared himself bankrupt was involved in two divorce proceedings and died in London of alcohol related problems. At one time he was married to the former wife of american painter George Henry Yewell. Forty-seven of his oil paintings are held in UK public art collections.

We would prefer collection in person for this item. 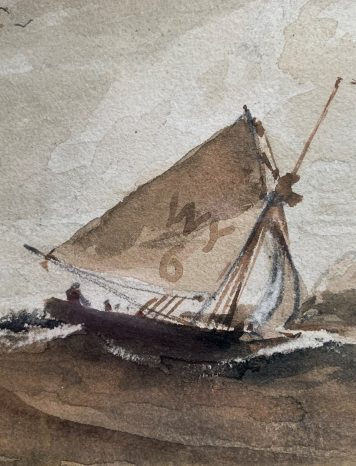 You're viewing: A Picture of A Sailing Boat on a Choppy Sea By Edwin Ellis £150.00
Add to basket